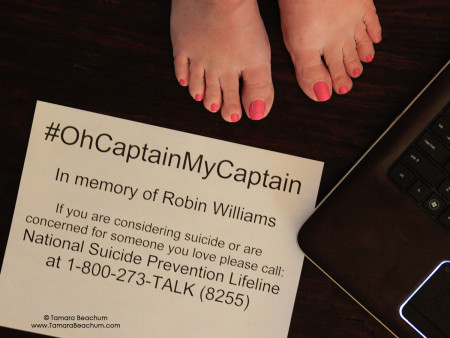 On our first real date in 1989 my late husband and I saw Dead Poets Society. It was a great date-night movie, inspirational with poignant reminders to explore, stay curious and that we are all creative beings. We were in our early twenties just venturing out in our own lives and trying to figure out how to make them extraordinary. The film was poetry brought to life through script, cinematography and cast.

As I recall this was my first experience of Robin Williams in a serious role moving him far beyond the simple but fun silliness of Mork from Ork. He was superb in the lead role; a vast talent not just mere funny man. I was uplifted by the experience of watching him and became a fan for life.

He glows before us on the silver screen standing on top of a desk. “We must constantly look at things in a different way. The world looks very different from up here,” he tells the students, encouraging them to climb up too and look around with a new perspective. “…just when you think you know something, you have to look at it in another way, even though it may seem silly or wrong. You must try.”

We think we know death and the reasons for it. Robin Williams took his own life and speculation abounds as to why: addiction, depression, maybe even bi-polar proposed one armchair psychiatrist in the media. He, like so many others who have died by suicide, is called selfish for his actions.

But let’s take a new perspective. Let’s climb up on that desk and look at this from a different view.

How hard must it have been to look out at the world from behind his eyes? For all his success, fame and riches he was still a human just like the rest of us. That internal voice – you know the one, you have it too – it sometimes tells us we didn’t do a job well, we aren’t good enough, we can’t beat this next challenge, our lives are not going the way we want, and so it goes. If you’re lucky you can tell that little voice to take a hike but for some – for many – it’s not that easy. There is a pressure and a darkness that suffocates. Their internal dialog screams, “Life will always be this way,” “I’m a total failure because I can’t beat this,” “I should be able to control how I’m feeling,” and even “My family will hurt for a while but eventually they’ll see that they’re better off without me.”

“I’m trapped,” said the character of Neil who took his life in Dead Poets Society. He saw no way out. Robin Williams must have seen no way out. Do you ever feel this way? Look around you. Who do you know right now who may feel this way?

Depression is an illness just like heart disease, cancer, respiratory disease, diabetes and the list goes on and on. Yet somehow we expect those who have it to suffer no mortality. We expect them to think their way out of it, to unfailingly get help. We expect those around them to notice the signs and get help for them. At times, we are very much like that voice in their head telling them, “Get over it already.”

My husband had symptoms that indicated he had cancer but we weren’t aware of the connection. No one blames him. No one thought for a second to tell him, “Get over it already.”

And while we are up here on this desk looking at the world from a new perspective let’s take a closer look at what it’s like to love someone who takes their own life. You’ve just lost a person that meant the world to you. Your own internal voice may be the very one shaming with an insistent wail of, “Why didn’t I see?! Why didn’t I see?!” The last thing that loved one needs is to have us chiming in with our judgments and speculations.

No one blames me for not noticing my husband’s symptoms and leaping to the conclusion that he could one day die from cancer. Why are we so quick to do that when someone dies by suicide?

What you can do instead is express your sorrow for the loss, listen if you are near those who are still here and remember who the person was in life. Tell those stories. Focus on the life, the laughter, and the memories.

In tribute, stand on the desk once in a while and look around with your new perspective. Don’t let anyone tell you to sit down.

“That the powerful play goes on, and you may contribute a verse.” ~ Walt Whitman

#OhCaptainMyCaptain - I stand on my desk in tribute, admiration and to let you know I will look with a different perspective because of you. This powerful play goes on and we will surely miss you, Robin Williams. Your verse was significant and you will long be remembered with fondness and laughter. Deep peace to you.