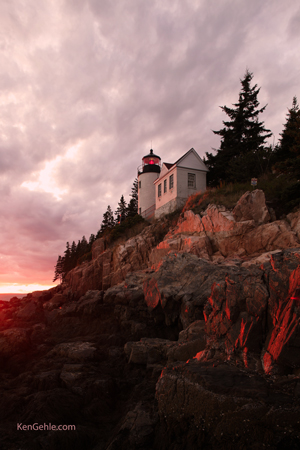 I’m not sure why this popped into my head – grief will bring up random memories unbidden – but I was thinking about the last trip that my husband took to shoot landscapes. It was September 15th. The prior September on the night before that trip to Maine had originally been planned, he got the call that the eating problems he had been having were due to esophageal cancer. He cancelled the trip even though the first appointments with the medical team were after he would have returned. My anxiety was already through the roof and would have only been made worse if he was gone. He knew that. He painted the house that week instead.

Travel is beginning to look like a possibility again now that I’m fully vaccinated against COVID-19 and restrictions are being eased. Maybe that’s what brought this memory to the front. The relief I felt booking a trip might have been similar for Ken when he could, once again, make those plans to go to Maine. He purposely set the flight out for the 1-year anniversary of his cancer diagnosis to make it a real celebration.

Not being able to travel at all the last year was difficult. I had a glimpse of what it was like for him in some small way. Of course, he had the real possibility that he would not travel again while my situation has been temporary.  I’m glad he didn’t know it was to be his last trip. Remission ended less than two months later and the images from that trip live in 1s and 0s on his hard drive. He never got around to flagging the good ones and processing them for publication. Just this week, I finally had the strength to pull them up and see what is there. I flagged about a dozen that would make beautiful fine art prints so I will work on getting those on his website.

Looking at the final set of images he took there was one theme that I have never seen in his raw photos before: portals. There were an outsized number of images of doors and windows. I’m not sure what to make of that, if anything, but it feels like a metaphor alert.