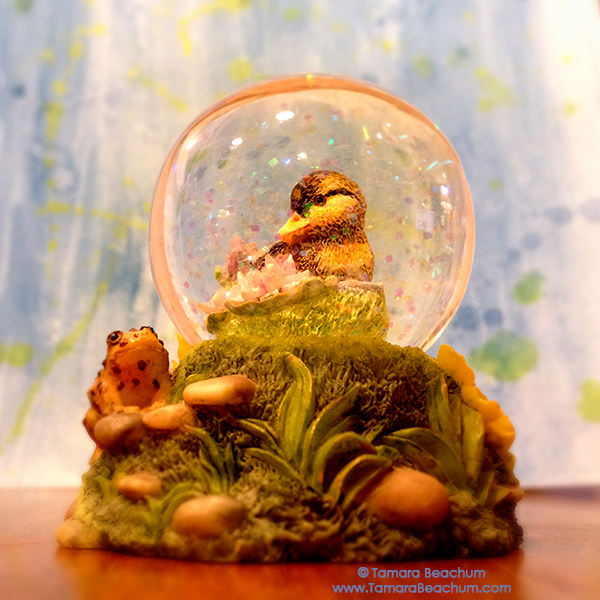 When my kids were small I would easily purge toys and ephemera from their rooms with some regularity. A few items that they couldn’t quite release yet would be put in boxes that I would store for them to go through later. Later never really came though and now that they are all grown up they don’t have an interest in those boxes at all. “Give it all away,” my daughter said casually. She didn’t feel the need to look. Now that they are on the other side of childhood it’s harder for me to just load up the boxes for donation. So I’ve been going through them and, even though very few objects are making the cut, it has been an emotionally challenging job. But there was a bright spot that lifted my spirits when I got to the bottom of the most recent box and found this little sweetheart of a snow globe.

I can’t recall all of the details around it and my co-rememberer (yes, I made that up), her father, is not here for me to ask. I seem to remember this snow globe was in my daughter’s Easter basket one year. The date on the bottom, 1998, probably means it was her last Easter basket as an only child. Her nickname at the time was “little duck.” When her brother began to talk he gave her a new nickname and there was no going back.

Immediately, I knew where this snow globe would live next. A friend’s daughter has Asperger’s Syndrome. Birthdays are hard for her. While she would like to have a party there can be a lot of stress and anxiety around the planning and the actual party can be too stimulating. She also worries that no one will come. Understanding this trepidation, her mom came up with the creative idea to have a virtual party for her daughter. The mom invited her own friends to send her daughter something she loves - snow globes - nothing fancy or expensive, just thrift store finds or old ones that the senders no longer want. Snow globes are being sent in from all over the country. It’s turning out to be quite a big party.

My little duck has flown away and now this little duck is flying to another girl who will love it…until it’s time to let go.

What are you letting go of right now? What do you need to let go of but can’t quite unpack the box yet? How can you use your creativity, like the mom in this story, to take a different perspective on the problem?

Does this resonate with you? I would be honored if you would share it using the buttons below.