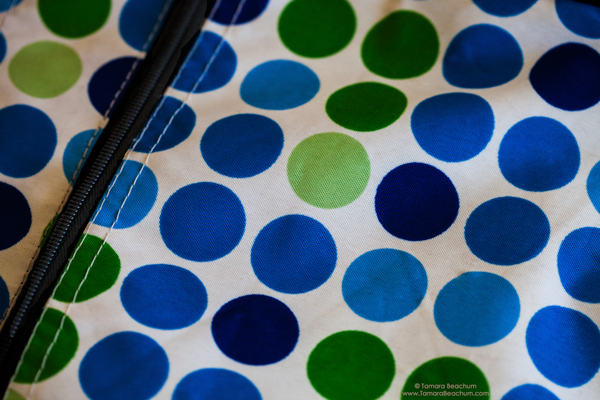 “I’m going to come sit with you tomorrow. I’m good at hospitals,” she said. It was September 28, 2008, the night before my husband had major surgery to remove his cancer and his esophagus along with it. I’m not sure what I was thinking by not planning to have someone sit with me that day. Clearly, I wasn’t thinking at all. Thankfully, Laurie and the rest of my book club came to the rescue.

Laurie arrived in the waiting room that morning and presented me with a cute book bag with giant polka dots of blue and green. It was filled with items I didn’t know I would need: tissues, water bottle, lip balm, lotion, hand sanitizer, a shawl for cold waiting rooms, a starter kit for knitting, a small spiral-bound notebook with pen and more.

Others wandered in before work or after kids were seen off to school bearing hot drinks and cheer. Team Ken was formed. These women I had known for a decade or more by then made me laugh and forget why we were sitting in those uncomfortable straight back chairs in tight rows across from cartoonish prints that had us inexplicably looking out castle windows to other castles beyond. The distraction was complete until it became too late in the day and the surgery was taking too long for the news to be good. Some had to go; it was time to get kids from school and think about dinner. Our pastor arrived.

I noticed the surgeon the second he walked through the door, his eyes on the ground, legs propelling him toward a conversation that I could already tell he didn’t want to have. One of “those” conversations. Laurie removed the notepad and pen from the charming polka dot bag and started making notes as he spoke. Stage 3, not stage one. Couldn’t get it all. Radiation and chemo to follow. My chest buzzed. I pulled my legs up into the chair. I was suddenly cold and shivering from my core. “May I ask questions,” Laurie looked at me. I nodded my brain had entered a fog-like state anyway. Laurie, a fact-finder, asked the doctor good question after good question and scribbled diligent notes in the little red notebook. So many things I wanted to know or didn’t know that I wanted to know were recorded there.

When he left all attention turned toward me. The buzzing in my chest was now rising up through my throat in searing heat. Cold seconds before, I now felt aflame. I don’t recall saying I was nauseous but a plastic lined trash can appeared at my side. “You’re not having a heart attack. This is a panic attack,” Laurie said. “It won’t kill you, it just feels like it will.” I laughed.

So much of what happened the rest of that day is a blur. Everyone around me was so supportive, each doing what they could to help me as the doctors and nurses watched over Ken through the end of the surgery and recovery. They each made sure I wasn’t alone in turn. Laurie took my doctor’s number and told her what was happening. A prescription was called in and she left to pick it up for me and make a quick dinner for her own family before returning. The wait went on past dinner and into the evening. Laurie stayed. We were moved to the ICU waiting room. Another friend and her husband came back to keep vigil with me. I had a banana for dinner that I couldn’t finish. Laurie’s calm and non-anxious presence was perceptible and pulled me back toward her across the spectrum of anxiety when I strayed. At long last, I was called back to see Ken and left Laurie sitting in the waiting room with her knitting. She told me later that she watched us through the window to make sure I was alright. She truly was “good at hospitals.”

Ken and I were both Presbyterians but, truth be told, he had become more agnostic over time. When talking to our pastor one day he discussed a new change in his faith. “I have felt the presence of God through angels right here.” I knew exactly who he was talking about. Laurie was one of several angels we had around us. He was in awe of their selflessness and compassion.

While I have never truly lost my sense of spirituality, I have admitted before that I don’t know how to pray in a piece I wrote about my inability to find words that felt sufficient on the eve of Laurie’s surgery after her own cancer diagnosis. Throughout her illness, remission and illness again I have tried to be there for her in word and deed but always feeling inadequate in reflection on what she had done for us. Yes, I know it’s not a competition and I really don’t see it that way. I would simply like to return her generosity in good measure, if that can be simple. I make another attempt at prayer. And another at deed.

On what would have been Ken’s fifty-third birthday I had the honor of staying with Laurie over-night in hospice. Her family prepared me that she slept a lot so I packed up my polka dot book bag with a few items I thought I might need including, of course, a spiral notebook and pen. I had learned from the master after all.

When I arrived I was comforted that she called me by name. She was remarkably lucid and alert most of the evening as we chatted off and on between her catnaps. She recognized the polka dot bag. I shared that when I told my son where I was going for the night he remembered her as the one who let him play games on her iPhone outside Ken’s hospital room. Noting that it was Ken’s birthday she asked me how I felt about that. “It’s bittersweet,” I told her honestly. Being with her on that day felt like a divinely conspired event, a thank you from both Ken and me for the role she played in our lives. An answer, of sorts, to a prayer though naturally I would have preferred a far different answer.

On that night I learned more about how to be “good at hospitals” from Laurie like the perfect ratio of crushed ice to water. In my toolkit, I now have a procedure for how to help someone who can’t get out of bed to brush their teeth with a real toothbrush and toothpaste. Imagine, for a minute, what a simple pleasure that is. Laurie luxuriated in the task and it was a joy to watch.

When, addled from a recent dose of medication or a brief sleep, she said odd things, I went with it. Correcting someone in this state just causes anxiety and no one needs more of that. At one point she attempted to lean forward and spoke to me as if we were on a retreat.
L: “So Tamara, tell me what you want to get out of the weekend?”
T: “I’m sorry, what?”
L: “What do you want to get out of the weekend? Accomplishments? Set priorities?”
T: “…I think I’d like to work on letting go, on finding peace.”
She nodded, sat back and relaxed.

We talked about the expressions of love that surrounded her: the mountain of cards, the dresser-top full of flowers, the mini ice creams tucked in the freezer, the prayer shawl folded over the bottom of her bed rail where she could see it always. She told me who was responsible for the latter, a common Facebook friend, so when Laurie slept I made sure that Grace knew it was there. She told me the story of the Gracynjoy Prayer Shawl’s creation and how tribe members of Patti Digh’s Life Is a Verb Camp, at which Laurie presented in 2013, had wrapped themselves in the shawl to place within it their love, prayers and admiration before it was sent to Laurie.

January 10, 2010 post on Ken’s Caring Bridge journal: “…The story here is that [Ken and his family are] deeply loved and this corner of the ICU waiting area is a calm raft where people are bound together by that love and caring for each other. We are praying together and feel your prayers, too. Thank you. Laurie”

That’s the story here too now. Laurie is on her own calm raft. Just as we did back in 2010, she and her family feel love surrounding them today. I can’t say it is easy but there is more peace. That’s what I pray for her now, deep peace.

It feels right that Laurie is leaving us this Lenten season, a time of reflection where we enter into the darkness before coming into the light of resurrection. (Well, as right as it can anyway.) This time last year Laurie felt called to create an online group where she shared her personal daily Lenten devotionals with others. This devotional is my final offering, in deed and prayer, to Laurie:

Dear God - Thank you for the life and love of Laurie. If there are angels personified, she is surely one. We are blessed to know and be inspired by her. Help us navigate the darkness that we begin to walk through as she enters into the light of pure love. Enfold her in your grace as we carry on changed and better for her presence in our lives. She is - and we are - transformed.

The last words I said to her were, “I love you, Laurie.” “I love you too,” are her final words to me. I will carry those always. Love lives on.